Let us Know What is Google Map 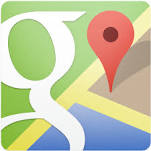 Google Maps APIGoogle created the Google Maps API to facilitate developers integrating Google Maps into their web sites with their own data points. It is a free service, which currently does not contain ads, but Google states in their terms of use that they reserve the right to display ads in the future.
By using the Google Maps API you can embed the full Google Maps on an external web site. Start by creating an API Key it will be bound to the web site and directory you enter when creating the key. Creating your own map interface involves adding the Google
On May 25, 2007, Google released Street View, a new feature of Google Maps which provides 360° panoramic street-level views .
Email ThisBlogThis!Share to TwitterShare to FacebookShare to Pinterest
Newer Post Older Post Home