6) The circuit shown is the figure is 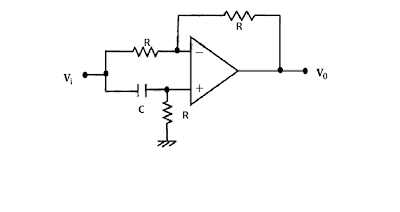 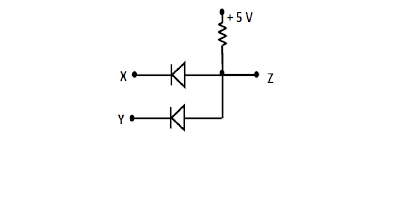 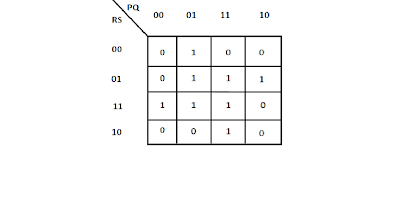 9) In the figure shown, the initial state of Q is 0. The output is observed after the application of each clock pulse. The output sequence at Q is 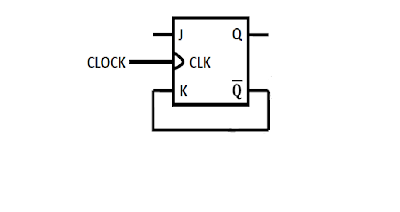 13) A linear time-invariant causal system has a frequency response given in polar form as . For input x(t) = sin t, the output is

14) A 50% duty cycle square wave with zero mean is used as a baseband signal in an ideal frequency modulator with a sinusoidal carrier of frequency . The modulated signal is given as an input to an ideal phase demodulator (a circuit that produces an output proportional to the difference in phase of the modulated signal from that of the carrier). The output of the circuit is
(A) a square wave
(B) a train of impulses with alternating signs
(C) a triangular wave
(D) a sinusoidal wave

15) The figure shows a periodic waveform to be displayed on a CRO. A trigger setting which ensures a stationary display is 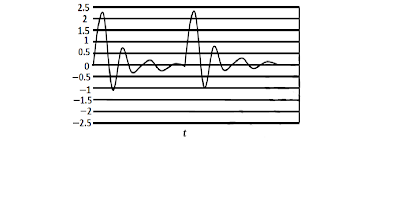 18) A plant with a transfer function is controlled by a PI controller with = 1 and ≥ 0 in a unity feedback configuration. The lowest value of that ensures zero steady state error for a step change in the reference input is
(A)0
(B) 1/3
(C) 1/2
(D)1

25) The differential equation = , with x(0) = 0, and the constant 0 , is to be numerically integrated using the forward Euler method with a constant integration time step T. The maximum value of T such that the numerical solution of x converges is
(A)
(B)

27) The response of a first order measurement system to a unit step input is , where t is in seconds. A ramp of 0.1units per second is given as the input to this system. The error in the measured value after transients have died down is
(A) 0.02units
(B) 0.1unitsThe source network S is connected to the load network L as shown by dashed lines. 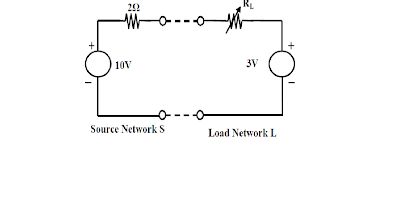 30) The figure shows the cross-sectional diagram of an orifice flow meter with an orifice radius R. Point ‘a’ is 30R upstream while points ‘b’ and ‘c’ are 0.8R and 30R downstream from the orifice respectively. The pressures at points a, b and c are , and respectively. Then 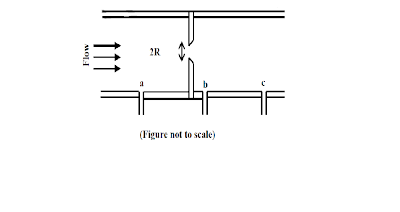 32) Four strain gauges are fixed on a cylindrical shaft to measure torque, as shown in the figure. 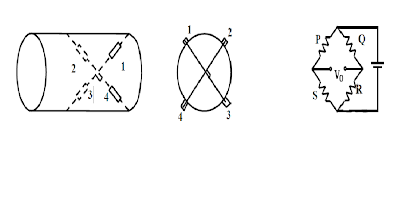 A correct way to place these gauges in the bridge is

33) In the circuit shown, the Zener diode has ideal characteristics and a breakdown voltage of 3.2V. The output voltage for an input voltage = +1V is closest to 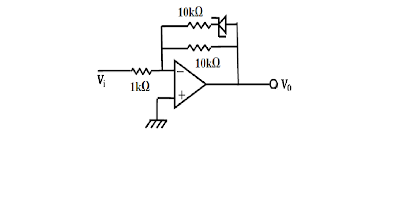 34) The input resistance of the circuit shown in the figure, assuming an ideal op amp, is 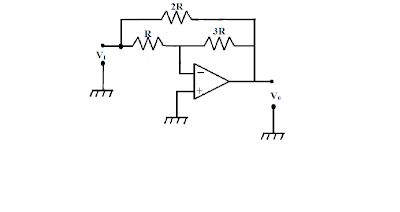 35) In the circuit shown in the figure, the switch S has been in Position 1 for a long time. It is then moved to Position 2. Assume the Zener diodes to be ideal. The time delay between the switch moving to Position 2 and the transition in the output voltage is 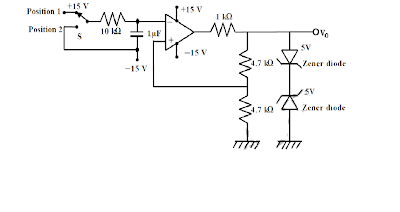 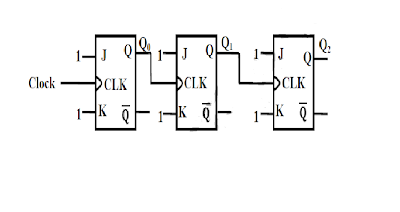 38) The following is an assembly language program for 8085 microprocessors:

41) An analog signal is sampled at 9kHz. The sequence so obtained is filtered by an FIR filter with transfer function . One of the analog frequencies for which the magnitude response of the filter is zero is
(A)0.75kHz
(B) 1kHz
(C) 1.5kHz
(D)2kHz

43) The dc potentiometer shown in the figure has a working current of 10mA with switch S open. Let + = 100Ω. The galvanometer G can only detect currents greater than 10 μ A. The maximum percentage error in the measurement of the unknown emf Ex as calculated from the slider position shown is closest to 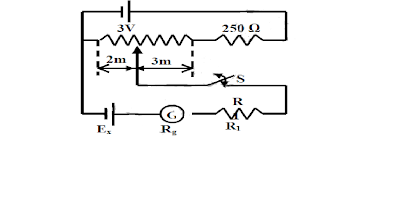 
44) A filter is represented by the signal flow graph shown in the figure. Its input is x(t) and output is y(t). The transfer function of the filter is 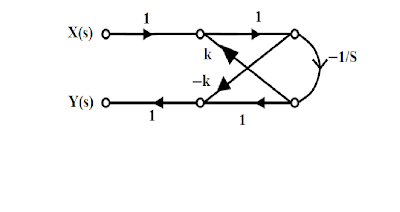 50) In a pulsed ultrasound imaging system, a single 5MHz crystal is used both as source and as detector. Bursts of at least 20 cycles are needed for acceptable image quality. The velocity of sound in the tissue being imaged is 1500m/s. The minimum distance of the objects to be imaged should be
(A)12mm
(B) 6mm
(C) 1mm
(D)3mm

The figure shows a sample-and-hold circuit using a MOSFET as a switch. The threshold voltage of the MOSFET is +2V. It has zero leakage current in the off state. Assume that the capacitor is ideal. 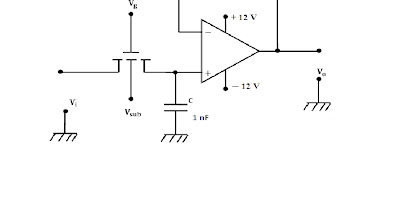 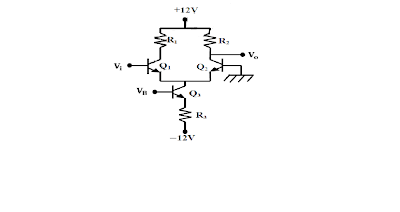 The figure shows an arrangement for measuring small angular displacements in a vertical plane. A non-conducting tube of length 2l and rectangular cross section (width w, height d) is bent along an arc of a circle with radius R >> d, centered at P. Four electrode plates of length l and width w are placed to form two curved parallel plate capacitors and with a negligible gap between them. The tube contains water with an air bubble of rectangular cross section (width w, height d) and length l/4. The capacitors are connected in a bridge circuit as shown in the figure, where the bridge has ac excitation . Angular displacement occurs about the point P. 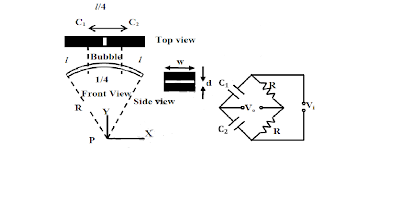 Statement for Linked Answer Questions 57 and 58:

A disturbance input d(t) is injected into the unity feedback control loop shown in the figure. Take the reference input r(t) to be a unit step. 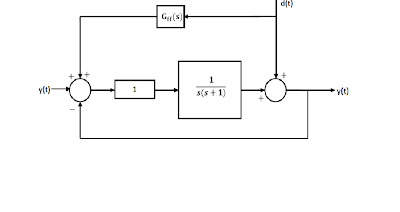 57) If the disturbance is measurable, its effect on the output can be minimized significantly using a feedforward controller ). To eliminate the component of the output due to d(t) = sin t, should be

Statement for Linked Answer Questions 59 and 60:

A Michelson interferometer illuminated with a source of central wavelength and spectral width of is adjusted for equal path difference for the beams returning from the two mirrors. When one of the mirrors is moved by a distance of 0.1mm from this position, 300 fringes move past the field of view. When the mirror is moved further, the fringes completely disappear when the mirror is approximately 4cm from the initial position.